Alden-Hebron High School is the smallest school to win the Illinois High School Boys Basketball Championship. In 1952, with an enrollment of 98 students, the boys team won the state title with an overtime victory over Quincy. At the time, all Illinois schools competed for a single championship, regardless of enrollment. The town's water tower is painted to look like a basketball in commemoration of the event.

The year was 1952, in a small Midwest Illinois hamlet called Hebron, population 650. For those in the area who had never heard of the Sweet Sixteen Tournament or didn’t know the difference between a grapefruit and a basketball, all that was about to change. Little Hebron was about to be put on the map by a high school basketball team that wore green and white and called themselves the Green Giants. 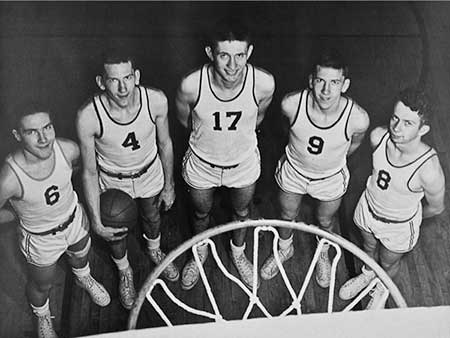 I guess you could say Hebron’s basketball success story really began back in 1927 when Lowery B. Crane started coaching the junior varsity basketball team. The students called Coach Crane “Red” because of his striking red hair.

Coach Crane was all basketball, encouraging the school board to install hoops outside the high school and the townsfolk to put up hoops wherever they could. In 1935, Hebron won its first county title in 11 years. Little Hebron’s basketball team was now rising to new levels, playing on equal footing with the biggest and best schools.

Around 1940, the torch was passed to Coach Ed Willet. That year the Hebron team ripped through the competition, going all the way to the State Championships. Even though they lost in the first round, they still came home to a hero’s welcome.

By the next year, World War II came and high school basketball was placed on the back burner. Now some of those same students were going off to a distant war.

In 1948, Russ Ahearn arrived to coach. Coach Ahearn, a former semipro baseball player, had a strict routine, instilled a good diet and regimented exercise, and most of all, liked winning. He brought Howie Judson* on board as an assistant coach, a former Hebron High basketball player and then Chicago White Sox pitcher. They didn’t win the 1950-51 state championship, but the stage was now being set.

Rules came down from the top in 1951: “No dating, except Saturday nights, take your vitamins, get the proper sleep and practice all you can,” Ahearn mandated. And so they did, shooting hoops after morning chores, going to school, practicing at noon and after school, and at night, after the cows were milked. The Saturday night dating exception was actually a joke since there were always games on Saturday nights.

Enter 1952. All that work and sacrifice paid off. It wasn’t long before sport writers were reporting their amazement at this small school’s success. They were not only winning, they were steamrolling their opponents. Tickets were now fetching 10 times their face value. These farm kids, from a school of 98 students, whose home court was the tight confines of an old auditorium stage, were now signing autographs, playing a game on television and most importantly, winning.

On March 22, 1952 the Green Giants were headed downstate to the University of Illinois at Urbana–Champaign to play in the championship game against Quincy High School, which hailed from a town of 44,000 people.

They had been there before, but this time was different. This time it was all business, perfection and perhaps even stars aligning over little Hebron’s team of 10.

That day, Phil Judson, his twin brother Paul*, Bill Schulz, Ken Spooner and the late Don Wilbrandt started to play against Quincy. At the time all schools, regardless of enrollment, competed for a single championship, so it was an uneven playing field. The starting lineup was never relieved and played the entire game. On that day, Coach Ahearn’ team edged Quincy 64-59 in overtime, bringing the state title, and the beginning of a legend, to the smallest school in the 45 years of the tournament. The victory was watched on television and listened to on radio by more than a million fans.

More than sixty years have now passed since the Green Giants victory, but the legend is alive and well in Hebron. There’s the town’s focal point, which can be seen for miles: a huge water tower painted to resemble a giant basketball with an inscription dedicated to the ’52 Green Giants. There’s also Champion Pizza, and the Uptown Pub with its Green Giant Wall of Fame. The school has a nice, modern gymnasium now, but the old auditorium with its raised stage/basketball court is still there. The original center court circle has been cut out and rests near the team’s trophy case.
*Howie Judson, at one time Asst. Coach is the older brother of Phil & Paul Judson .