Major (his first name) Watson, is believed to be the only Revolutionary War soldier buried in McHenry County. Watson was one of the last survivors of the Revolution. Born on Nov. 18, 1739, in Sackets Harbor, N.Y, He came to the area with his daughter-in-law, widow of Zelotus Watson, from St. Lawrence County, New York, in 1837.

As a young man, Watson was captured by the Indians and held prisoner. At one point he was made to run the gauntlet. "Running the Gauntlet" was an Indian custom reserved for prisoners. In it, the prisoner was forced to run down two lines of facing Indians armed with war clubs and tomahawks who attempted to strike them. Watson was later adopted by an Indian chief but escaped with the assistance of a fur trader. 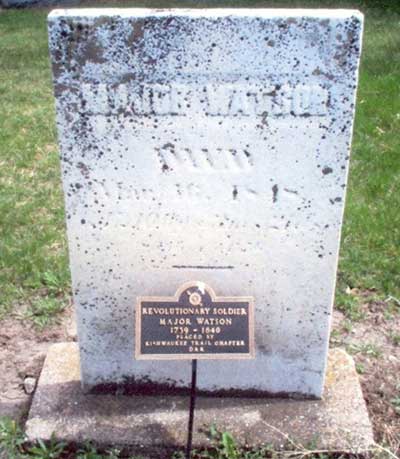 He served under Generals George Washington and Lafayette and was at the Battle of Monmouth with the First New York under the famous Col. Goose Van Schaik.  He was captured at Ft. Stanwix by Indians and held prisoner at Montreal for the duration of the war.

In the War of 1812, Watson enlisted again but was captured at Ogdensburg and held as a hostage in a prison ship off Chatham, England, until 1815. Discharged at Baltimore, Watson was ill for 11 months before he could begin working his way home to the St. Lawrence.

Sons of the American Revolution explain the comparatively large number of veterans who came to live in Wisconsin by the fact that their pension of $8 per month was often the only cash seen in a pioneer household. Therefore the old men were welcome in the chimney corner of a nephew or grandson.

Major Watson died on March 16, 1840, aged 100 years, 3 months and 16 days. Death was at the home of a daughter, Clarissa, Mrs. Daniel Downs in southern Wisconsin. Watson is buried at Linn-Hebron Cemetery, in Hebron.