A man who did much to further the cause of scientific agriculture in this country during pioneer days, and who even introduced progressive farming methods into Japan, was General Horace Capron. The General established a home in Illinois. The old Capron house on a hill near Hebron, in the vicinity of the much-visited lakes region northwest of Chicago, has become a well-known residential landmark.

Horace Capron, whom one biographical reference work designates as "a public-spirited man of outstanding character, high ideals, great personal courage, and of courtly, distinguished bearing," built his house in 1850. But it was not until 1854 that he occupied the mansion, bringing to it a second wife, who was Margaret Baker of New York. Here the Caprons lived during the 1850's and supervised their large farm, which was almost a thousand acres in extent.

"During 1850 and early 1851 the 'Mansion' was built, the bricks and building materials being hauled from Milwaukee by slow ox team," writes Kenneth K. Schaefer in a centennial history of Hebron, published in 1936. "The Capron house was a marvelous building for its day, and present-day visitors to the 'Mansion' cannot help being impressed with its spacious and multitudinous rooms, high ceilings, large fireplaces, solid mahogany spiral stairway and priceless glass chandeliers." 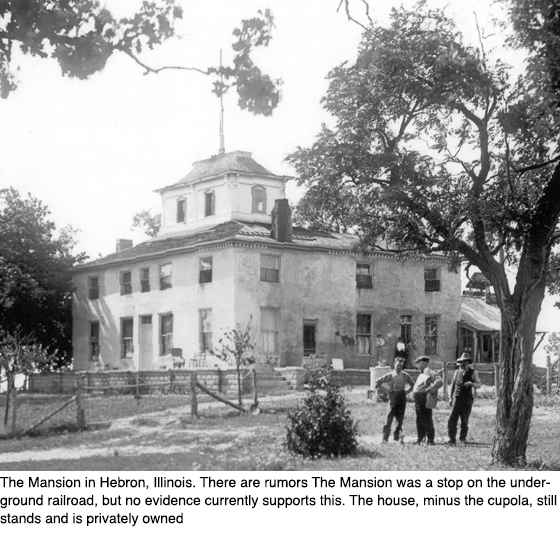 During the years he lived in his northern Illinois mansion, Capron enlarged his experiments in progressive farming and helped to educate other farmers to improve their cultivation methods. This work was interrupted, however, by the outbreak of the Civil War in 1861. He was commissioned a lieutenant colonel of the 14th Illinois Cavalry, served in many campaigns, and later became a brigadier general. For a time he was adjutant to General Grant.

After the war, General Capron returned to his northern Illinois farm and later went to Washington, having been appointed United States Commissioner of Agriculture. Then, in 1871, he resigned this post to accept an appointment from the Japanese government to introduce American farming methods into that country. After several years he returned to America and lived in Washington until his death in 1885.

When General Capron was living in his Hebron house after the Civil War, he entertained numerous distinguished persons, including General Grant. For his war services, Capron was awarded land by the government. On this tract the town of Capron grew up.

After General Capron left Hebron for Washington his mansion was occupied by his brothers, Newton and John. When they died, the Hebron house came into the possession of a number of successive owners, including George F. Harding, Sr., Halsey Fink, the Bates family, and George McClure. Here was born Granville Bates, well-known star of the "silent" movie days

The old Capron abode eventually became the country home of Ross D. Siragusa, president of the Admiral Corporation of Chicago. And, in 1945, Mr. Siragusa sold the property to Royce A. Kelley, of Alden, Illinois.

In 1989 the The Community Arts Council of Crystal Lake sponsored a tour of historic homes in McHenry County and those lucky enough to be on the tour visited the stately home.