The Kenosha and Rockford Railroad (originally the Kenosha, Rockford & Rock Island Railroad), running between its two namesake cities in Wisconsin and Illinois, started in 1861, but was largely abandoned by 1939. This railroad, known as the Kenosha Division, or "KD Line", was merged early on into the Chicago & North Western Railroad. The line ran directly through Hebron Illinois. 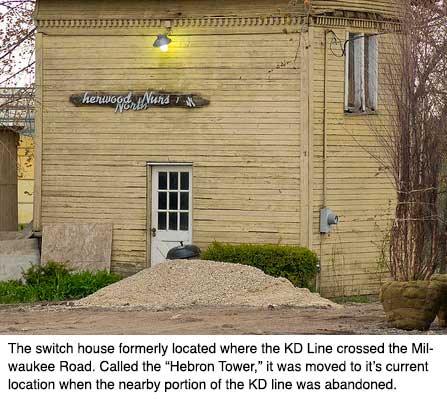 Although there is virtually no trace of the line's right-of-way today, in most places, several pieces of the line are preserved as bike trail; including the Ice House Trail between Twin Lakes and Bassett (WI), Hebron Trail between Hebron (IL) and just south of Genoa City, and Prairie Trail west of Chemung (IL) to Caledonia, where the trail swings northwesterly onto the Belvidere-Beloit alignment. There is also a trail that runs parallel to the tracks (Chicago-Chemung Railway) between Harvard IL and Chemung.

The Hebron Tower was built and operated by the Milwaukee Road, as it was the junior railroad at the crossing point, being built about 1900. The "Hebron Tower" was moved a mile or two north, converted to a house, and is still occupied today as a guest house at a nursery.

Regular passenger service ended about 1939, but as late as 1949 there was freight service between Harvard and Hebron. By the early 1960's freight only was delivered to Hebron from Genoa City/Junction to the East.

For more information, a book called "The KD Line" was published in 1986 by Paul Behrens that contains many photo's and history of this rail road.